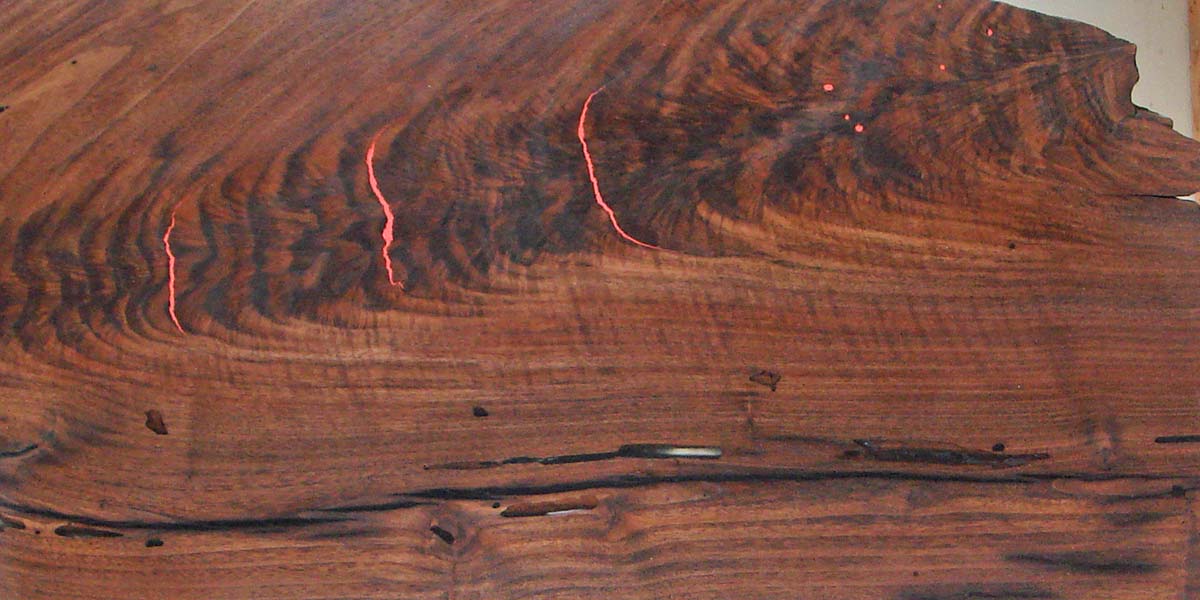 Northern California has its own species of black walnut, Juglans hindsii, which is commonly called claro walnut. It’s noteworthy in its own right, but also because it is frequently used as rootstock for English walnut. Claro walnut grows mainly in northern California, and it is considered a different species from Southern California Black Walnut.

Claro walnut came into my life when a resident of the Darms Lane neighborhood, north of Napa, visited our shop in 2014 during Napa Valley Open Studios. He told me about some wood available there after removal of an old walnut orchard; I was intrigued and went out to look at the wood with him. As a result of his tip, I collected a stash of interesting pieces which I was able to mill and make into furniture. My favorite piece turned into a small table top, shown in the picture: 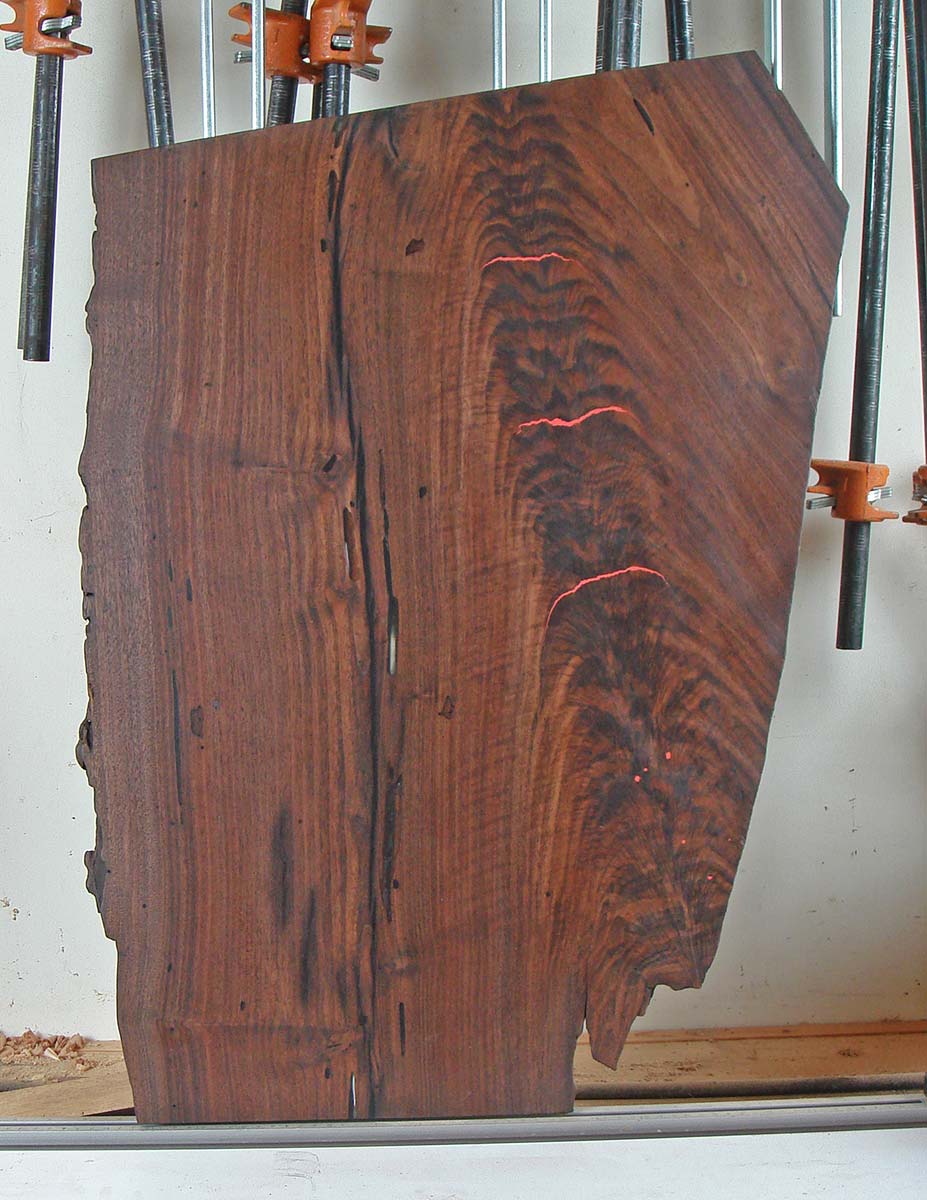 As the picture shows, the wood is uniformly darker than the Eastern walnut most people are familiar with. This particular piece has a wonderful swirly figure on the right side, with a few decorative cracks which have been filled with red-tinted epoxy filler. As I write, this tabletop is about to acquire a base.

A few years after my Darms Lane adventure, in February 2019, I got an inquiry from someone with a house in Yountville, who had lost a hundred-year-old backyard walnut tree to the ravages of age but had saved the lumber. He wanted to have a dining table made. In the end there was enough lumber for a coffee table and bench as well, although to finish the last item I had to use some lighter wood that appeared to be English walnut, from further up in the tree. The contrast of the two created a visual opportunity.

Then, at the beginning of this year, I acquired 300 board feet of claro walnut from another Napa woodworker who had milled and air dried it himself. I don’t know yet what to make out of it, but I have dug into that pile a couple of times already, notably to make the sliding door shown in the next picture. This piece again makes successful use of the contrast between the dark claro and a few pieces of lighter English walnut to create a lively effect. It is plain that I’m just getting started with this interesting local wood. 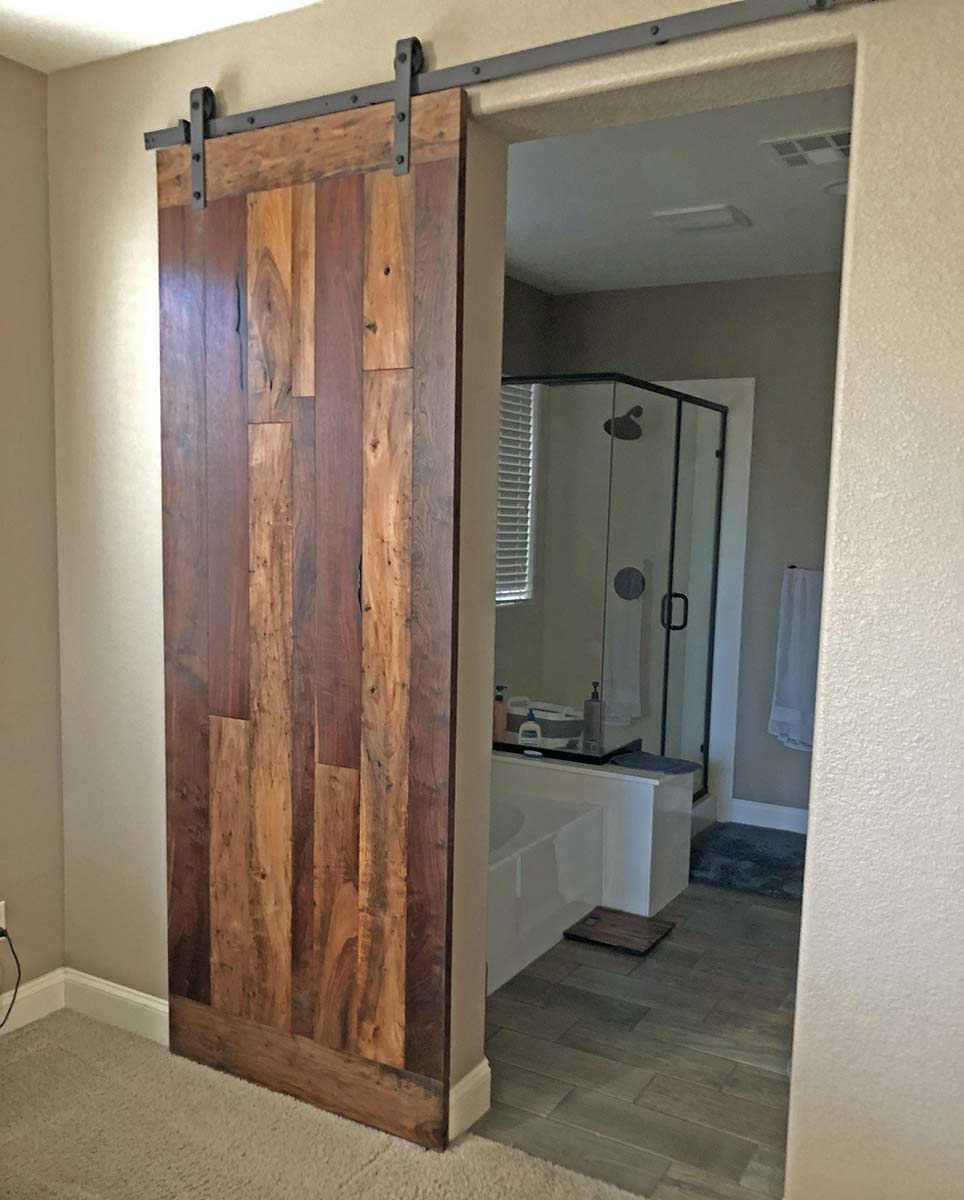