At an Oakland lumber yard several years ago, Evelyn and I ran across a pair of California native valley oak boards that offered vivid evidence that wood is, after all, biodegradable.  They showed the dramatic effect of fungal decay, not a usual sight in a commercial yard.   The hardwood dealer had seen potential in these boards;  my creative partner did too and insisted on taking the boards with us.  You can see in the picture below that the decay makes a book match, because the boards were adjacent in the original log.  There was, however, extensive crumbly material right in the areas with the most visual interest.

The boards lay on the shelf for a number of years until last winter, when something led me to pull them out again.  The dramatic figure could make either a wall hanging or a table top, but the idea of trying to make a functional table out of something crumbly turned out to be irresistible.  So we made a coffee table top about 32 by 48 inches, with the book match in the middle.  We stabilized everything with epoxy sealer, and we were able to find a clear slow-curing epoxy product to fill the numerous large voids and further stabilize the whole.  Filling the labyrinthine voids turned out to be an adventure, requiring numerous repeat applications of epoxy.  In the end we used over a half gallon. 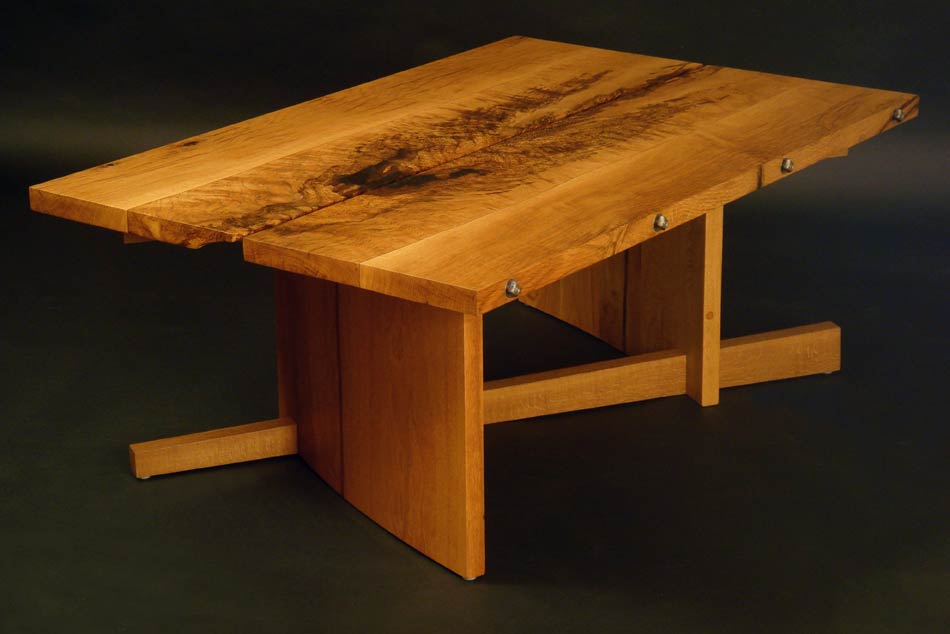 The finished table is shown in the second picture.  The complex surface includes highly polished transparent “pools” you can see right into, which are bordered by satiny bits of wood surface.  The two reflect light quite differently.  It’s a surface for someone who enjoys looking at and through things.

There is a gap in the table, right where the center joint would be if the boards had been glued normally.  They couldn’t be, of course, because there was almost no sound wood to make a joint.  So we decided to bolt the two halves of the top together with long threaded rods, with an emphatic reveal in the middle.  Besides accentuating the bilateral symmetry, the gap gives the viewer an interesting side view of the epoxy-filled voids.  Finally, we designed a sort of skewed trestle base, with wide coopered ends, to provide a geometric counterpoint to the complexity of the top.  The table was on display at Jessel Gallery in Napa during Open Studios Napa Valley 2018 and can currently be seen at Highlight Gallery in Mendocino.