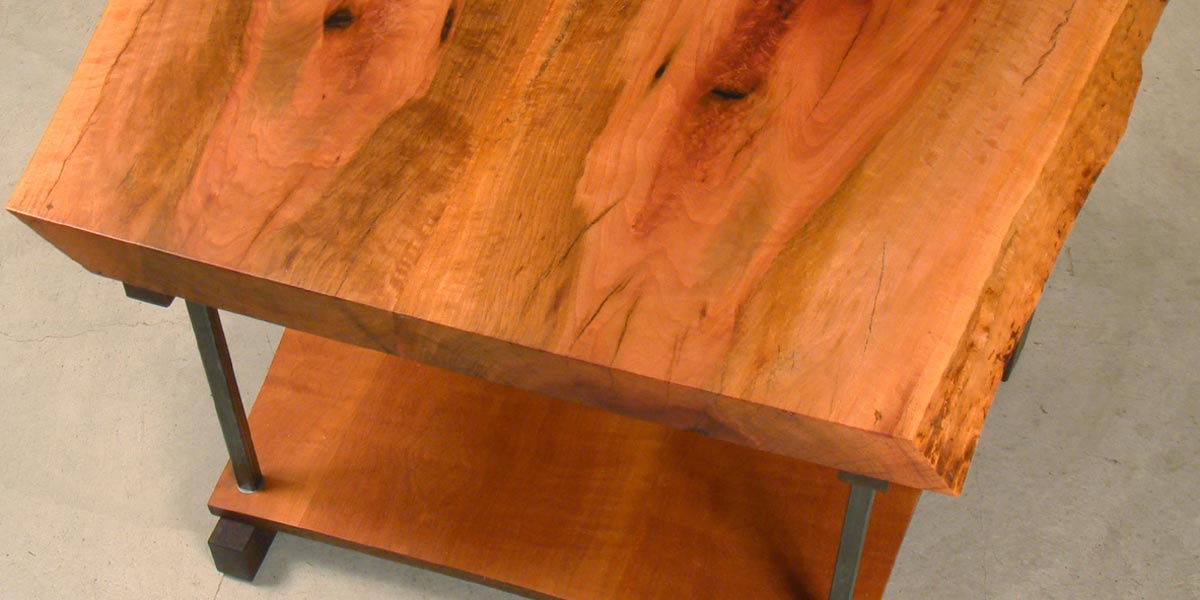 About a year ago we started on a set of mini-slab tables, inspired by a collection of small slabs that had come our way from a variety of sources.  We have now finished the lot;  it’s a varied collection of five different pieces.  Our only rule was to start with the slabs and let the personality of each guide the design of the whole table.  Apart from some general similarities in the support structure, each one is unique.

Tables are really very interesting to design, because there is a lot of space underneath, only a small portion of which is needed for the base structure.  These tops are not rectangular;  each has a shape that is part of its character, so each of the tables has a differently shaped base to go with the top.  The bases combine substantial wood members with visually light supports in plain steel, and several have veneered shelves in complementary species, which contrast with the highly textured solid tops.

The tops came from three different sources, all of them in Napa County, where we work.  They were not flat, several were severely damaged, and there were large voids in the wood, and making useful surfaces out of them took considerable effort.  The walnut table in the next two pictures has a good deal of clear transparent epoxy in it, which we used to repair damage done by woodboring insects that almost broke the slab in two.  The clear epoxy we use permits the repair of substantial damage in a very understated way, with only minimal visual distraction.  At the same time there were cracks that appealed to us, and we preserved those as visual features by filling them with red-tinted epoxy. 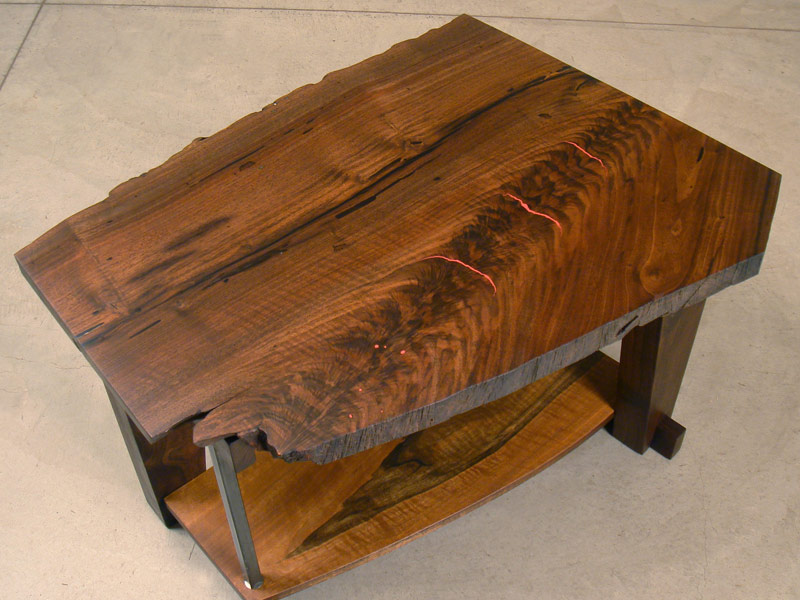 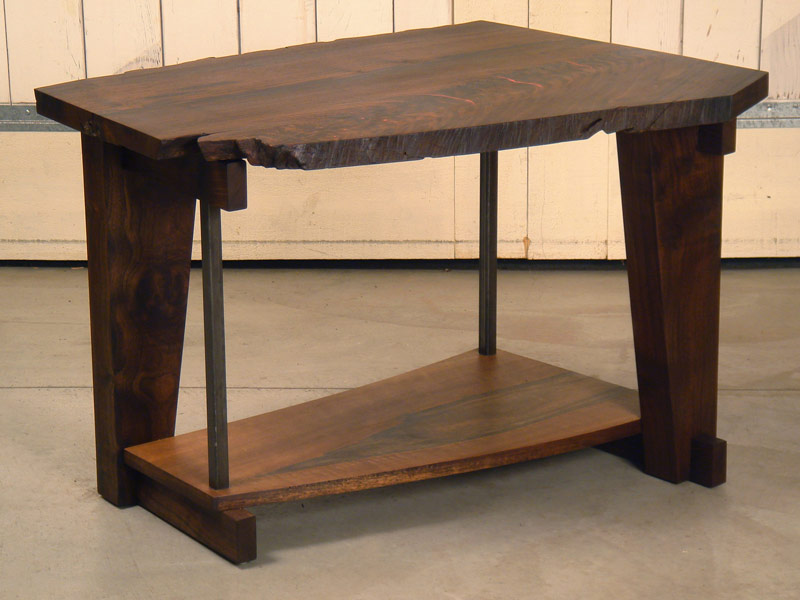 The footprint of this table has no right angles, and the veneered shelf even has two curved edges, in silent response to its geometrical surroundings.  There are elements of symmetry in the placement of the heavy wood and lighter steel legs. The table is made of Northern California native walnut, with French walnut veneer on the lower shelf.

The featured photo for this post shows a close-up of another coffee table from the set, in madrone, and the photos below show a couple of occasional tables, one in madrone and one in redwood.  All the tables shown have bases of Northern California walnut and plain steel.  The madrone coffee table had numerous voids, most of which we filled with clear transparent epoxy. 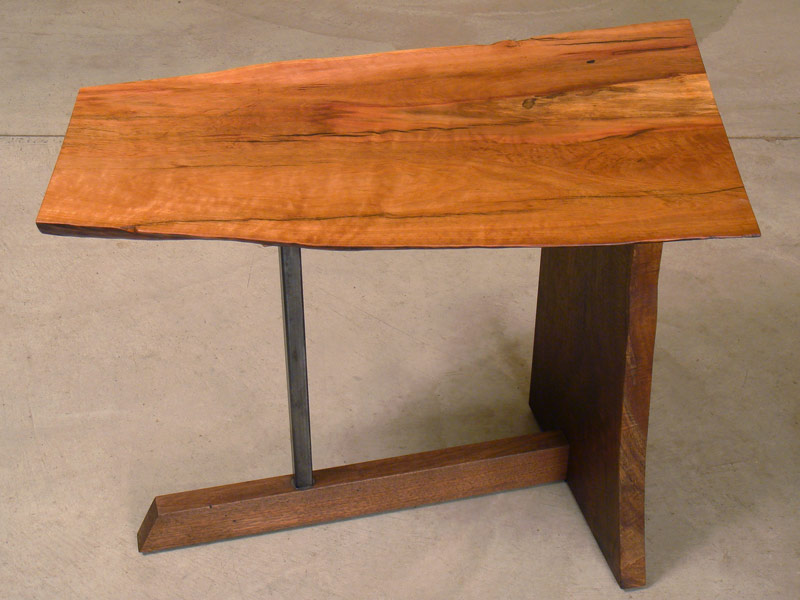 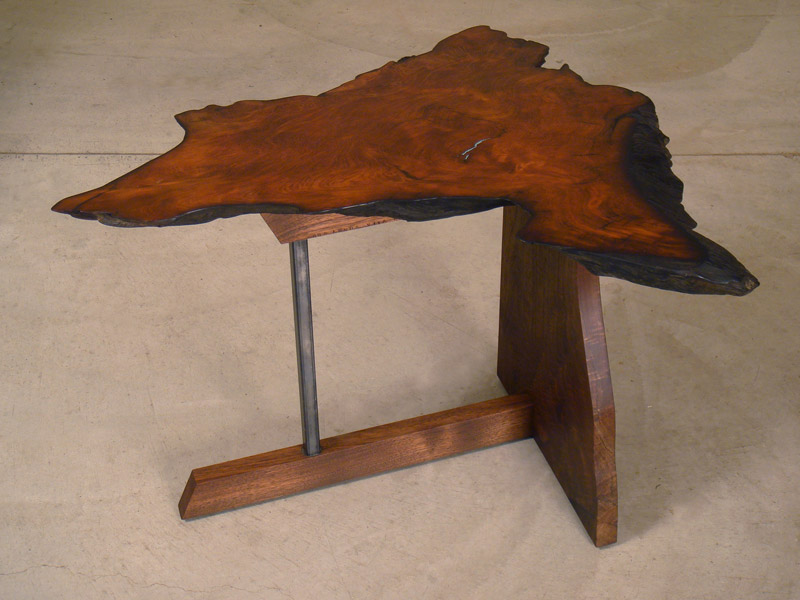 Just last week we had the pleasure of a beautiful drive to Mendocino  We dropped off two of these new tables at the Highlight Gallery, where they are now displayed for sale.  The rest have stayed in Napa.  We plan to show them, with other recent work, at a pop-up sale at our studio this spring.