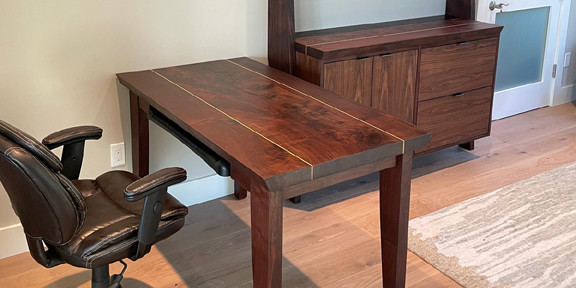 The aftermath of Open Studios 2021 kept us busy all winter, with a series of commissions that curiously all involved walnut.  One of these was featured in our last newsletter.  This- picture shows part of a more recent commission, a set of home office furniture.  It’s for a home on Atlas Peak Road, near Napa, that was rebuilt after the fire.

The project made use of some wide and thick Northern California walnut boards we acquired last year, combined with veneered panels of eastern walnut in the casework.  The local walnut is distinctly darker than the familiar eastern variety, and it is full of character.  The substantial desk, somewhat reminiscent of a farm table, features a wide central board with a very striking swirl figure.  The casework includes a printer stand, not pictured, as well as an upper cabinet attached to the same vertical uprights as the lower cabinet shown.  The upper and lower cabinets together make a substantial unit over four feet wide and nearly eight feet tall, which nevertheless is visually light and open.

The local walnut came to us from another craftsperson, who had milled it himself years ago and stored it locally ever since.  When he had to downsize his storage space, he made it available to us.

And here’s another new project, a new dining table, which makes use of walnut not as the principal species but as a complement to the red oak burls on each end of the top.  You may recognize the oak burls:  they are from the live oak tree we wrote about three years ago, which gave us a number of smaller furniture pieces.  This table was made for the engineer who got us that wood and his fiancee.

As we had hoped, the walnut goes well with the darker tones in the oak, besides providing a meaningful formal counterpoint to it. 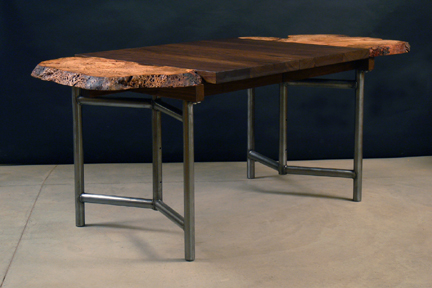