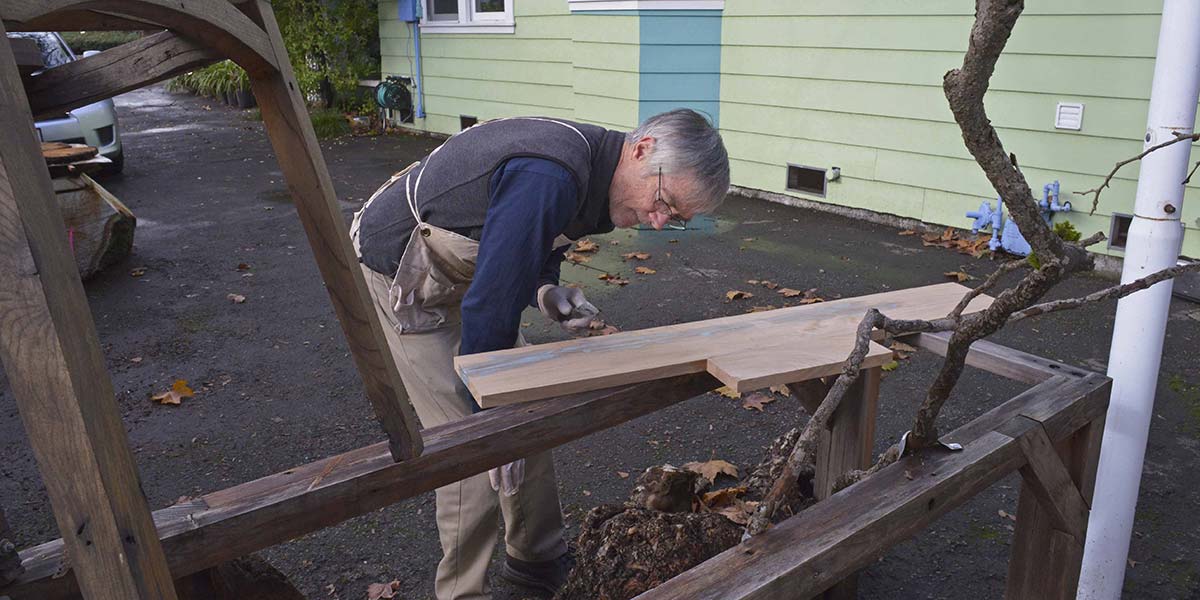 When we moved to Napa in 1987, one of the friends we left behind in our old Oakland neighborhood was Eric the photographer. I guess we didn’t exactly leave him behind, because he’s been up to Napa to photograph new pieces for us; but he did continue to live in Oakland. Shortly after we moved away he had a house fire, which destroyed his fireplace, and I designed a new mantelpiece for him to go into that Victorian house. There were a lot of old houses in that neighborhood, and in those days I had a number of projects that went into Victorians. However, this piece didn’t get built, for one reason or another, and over time I forgot about the idea.

Then last year the project came back to life. First, in 2010 Eric had to take down a large elm tree in his back yard, which had succumbed to disease, and I got some lumber from it. Then that lumber became dry enough to work, in 2014, and both he and I thought some of it should go back to his house.

We were standing in his dining room one day last winter, looking at the rough repaired fireplace which had been barren of a mantelpiece for more than twenty-five years; and Eric produced a drawing I’d given him in 1988. It showed the tall and rather ornate mantel that I had originally designed for the room. I had a distant memory of having drawn it, but nevertheless it was a jolt to think that I had put so much effort into a period design; that would be a very unusual project nowadays. After the initial shock passed, however, I began to look forward to doing something with that design. It would be fun to see if I could still make a piece with lots of doodads on it.

I started on the piece in November of last year, with about sixty board feet of Eric’s elm, and as I laid out the various decorative elements I had pleasant reminders of a once familiar but long-forgotten style of work. I was happy to find that things came back readily, once the appropriate context was supplied; it was like walking through the old Oakland neighborhood and remembering the various landmarks just before each one came into view.

For some happy reason, the activity was almost stress-free; I noticed early on that I had decided not to fret over the accuracy of period details but rather to concentrate on what was fun: trying to make a pleasant composition with well-executed joints. When I got near the end, I invited Eric to come up and review the final details, and he ended up taking a series of pictures of me while I was working on the top.

The top was where I ran into trouble with my allegedly Victorian design. What I had drawn looked too busy to me, as if it would just be weighed down by its decorative elements. Besides that, there was a great board that I wanted to use prominently at the very top, and it had a series of large drying checks in it. No one around here was surprised when I decided to use that board, because I am getting increasingly cranky about rejecting boards on account of erstwhile defects unrelated to utility; so I made an overt feature out of the checks, filling them with tinted epoxy. I found a blue-green tint that seemed harmonious with the range of tans in the elm without disguising that it was a conscious human intervention. The picture shows me working on the board in question.

There are a couple of elm medallions on either side of the piece, below the top shelf, shaped to mimic a marble remnant which Eric had saved from his old mantelpiece; and for one of these features I used another bit of wood with character: a knot filled with the same epoxy. When Eric saw the results of these epoxy adventures, his appetite for something new was only whetted, and he encouraged me to finish off the top in as original a way as I liked – to treat the Victorian context as a challenge.

A client like that is not to be denied. As she often does, my wife and creative partner Evelyn pulled from her vivid and concrete imagination a suggestion that went right to the point – a manzanita branch winding its way along the front. We had a dead manzanita shrub in our backyard; and a section of the trunk, when seasoned in our kitchen oven, provided a Napa accent to this Oakland elm product.

The finished mantel, shown below, went out ten days ago and will be installed soon. The marble remnant of the original mantel is prominently featured, along with the anti-Victorian surprises. 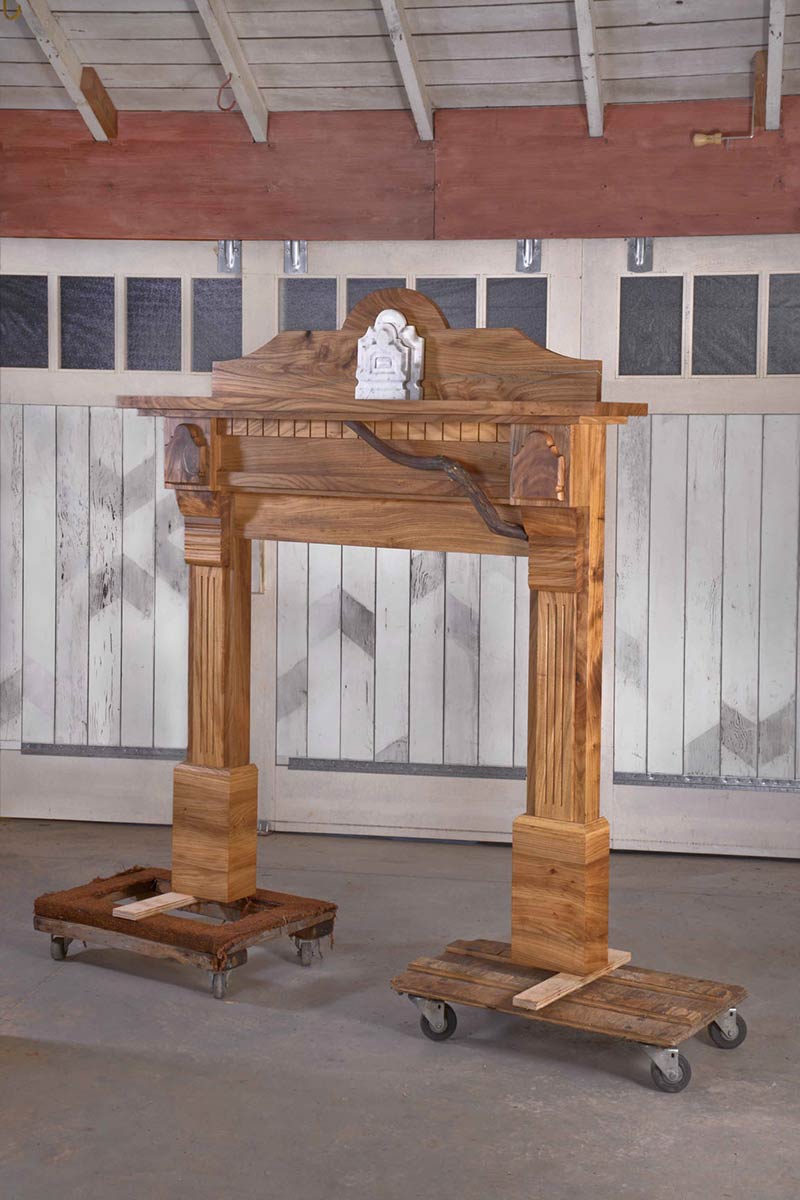 ← Previous: How Engineers Do Things Next: Virginia Woolf and Me →