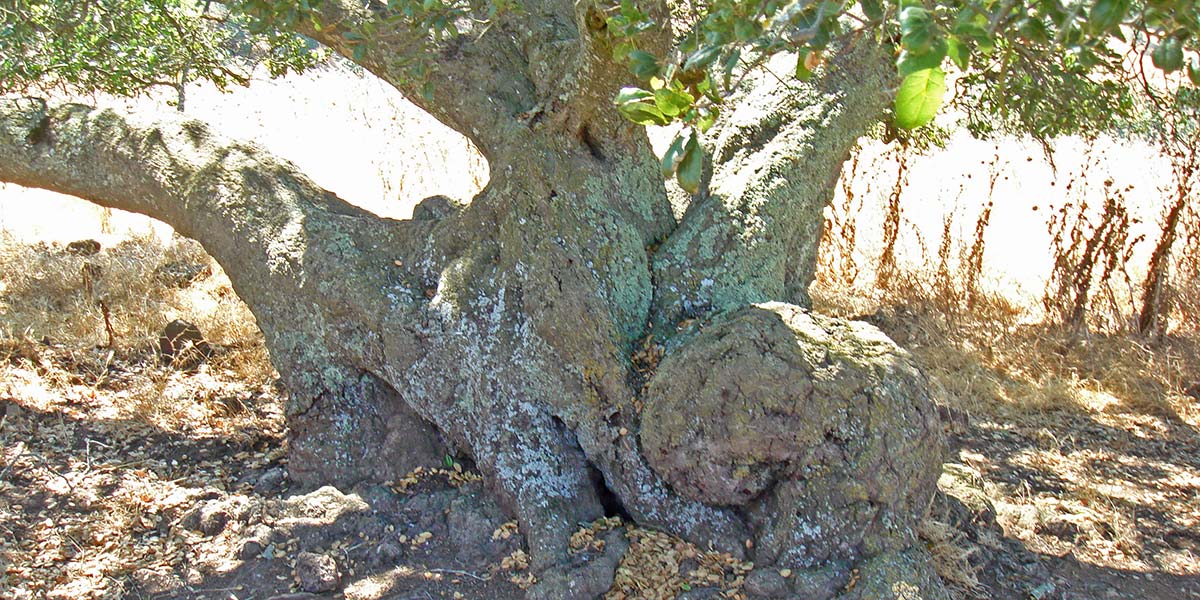 On returning from vacation in July I found a phone message from Jim Bushey, a local engineer working on a project near Napa, who wanted to show me a tree.  It was coming out to make way for a new vineyard, and he thought I might be able to use the wood.  The base of the tree seemed like one great mass of oak burls to him.  He thought it just looked interesting.

Five years ago I might not have followed up, but recent experience has convinced me that making furniture out of locally salvaged wood like this not only reduces my impact on the natural environment but creates opportunities as well, out of the uniqueness of the material.  I keep finding that an arresting tree or board tells me what I should make out of it.  So I went and looked at the tree with Jim.

It was a good-sized live oak tree, about 8 feet across at the base.  I couldn’t figure out how it came to grow like that, but I knew right away that I wanted to make some slabs and table bases out of it.  Jim put me into contact with Severiano Chavez, who was doing the tree-cutting and was able to cut the base of the tree into four large chunks and deliver them to me.  I estimated that the four chunks weighed about a ton, but Severiano was able to bring them in one go in his half-ton truck.  I would say he drove rather deliberately.  He unloaded them by tipping the bed of his truck until they all slid out, and when they hit the driveway my wife reports that the house shook.

Now the live oak chunks have been lying in my driveway for about a month, and I have finally managed to organize the project of milling them into slabs.  I started off with a list of local sawyers, but none of them worked out.  The job was too small for a couple of them;  another had gone out of business;  a fourth needed to have them brought to him.  However, each one I talked to had ideas, and I came up with what seemed like a good plan:  to mill the slabs myself, after buying a bigger chainsaw and borrowing a chainsaw mill – a frame that you clamp the chainsaw to and that serves to guide the saw through the log.

Yesterday I was ready to work.  I had researched chain saws and bought one that was big enough for a small milling project like this but not too big for everyday use;  borrowed a 30” Granberg Alaskan mill;  and bought an extra long bar and chain for the saw, to match the mill.  I want to tell you about what happened yesterday.

First, I mounted the new bar and chain to the chainsaw.  Or tried to;  the chain wouldn’t run freely on the bar, as you expect it to.  The bar came from the chainsaw dealer and the chain from Granberg, so back to the dealer in Vallejo to make sure there wasn’t some error.  There wasn’t;  the chain just needed to “run in,” apparently.

So I get back home.  After preparing the wood for milling and making last trips to the gas station and the hardware store, I start the saw and make some freehand test cuts.  Then I discover a cleat on the saw has to be removed before I can mount it to the mill, and that the bar is in the way of removing it.  Now the bar’s off, but a screw attaching the cleat to this brand-new saw is stripped.  How do I extract the screw?  After eventually getting it out, I mount the saw to the mill.  Attaching it is awkward, but finally it’s properly secured in the clamps.  I fire up the saw and start to mill.  Except that the chain won’t move.

Instead there’s smoke coming from the motor.  Not a good sign.  I forgot to mention that a neighbor and his three sons had walked up to visit just as I got the saw mounted to the mill, so I told them what I was doing and had an attentive audience for the motionless chain.  Now I apologize to the neighbors, who are politely going away.  One of the boys remarks that my show didn’t live up to its billing.

I unmount the saw from the mill, to see if that cures the trouble.  Turn on the saw, and hmmm:  the chain still isn’t moving.  What the hell is going on?  Oh, I think I have the chain brake on.  Yes, that’s it, now the saw works.  Put it back in the mill and try again.  What, it still doesn’t work?  Okay, I have somewhere to go and it’s now time to quit for today.

Later I thought about the trouble I had learning to drive with a clutch as a teenager.  I remember sitting with my father in our 1961 Ford Falcon one evening, killing the engine repeatedly;  he kept telling me to do something, while I managed to do the opposite over and over, and he became quite exasperated with me.

I’ll come back to this project Tuesday.  These slabs are becoming something special.