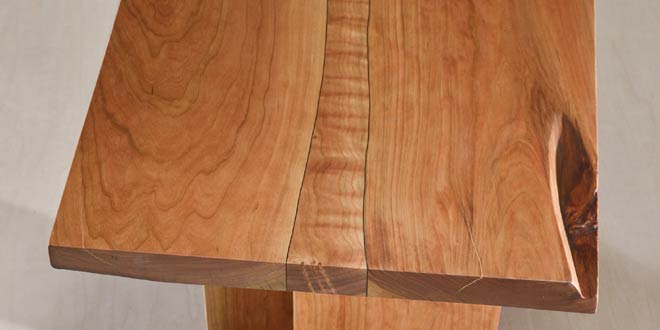 On vacation in New York recently, I visited a gallery show entitled “George Nakashima:  In Conversation,” described by its organizers as a collaborative exploration of the interaction of furniture by George Nakashima with the work of several contemporary artists.  The gallery space, named UNTITLED, displayed a sampling of Nakashima’s furniture in juxtaposition with a variety of art works, mainly paintings and ceramic objects.

I confess that my interest was largely confined to the furniture.  Nakashima was a leading maker of American studio furniture from the midcentury to his death in 1990, and the longer I make furniture the more important his work seems.  He was the woodworker who showed us the beauty of irregular wooden slabs, incorporating their natural edges into pieces that otherwise exhibit an elegant and modern spareness.  There are subtle touches of hand work as well, everything done with considerable restraint.

You hear Nakashima’s name a lot these days, especially from people who don’t seem to have noticed the element of restraint and might as well be taking Fred Flintstone as their model.  But I suppose being misunderstood is the price of being good.

Nakashima’s work was familiar to me only from photographs, and I was pleasantly surprised to find the undersides of tables rougher than the tops and to find slight irregularities around plugged screw holes.  I thought of Pablo Casals’s recordings of the Bach cello suites, with their occasional buzzes and squeaks;  I am told that the young musicians who win places in first-class orchestras nowadays must perform flawlessly in their auditions, and I think that something similar is true in the world of woodcraft.  The furniture you find in craft galleries these days is executed with amazing care to detail, but I think sometimes that there is no life in it.

Nakashima’s work is not massive.  The natural slabs I saw were less than two inches thick, and I found that the main source of visual interest was the contrast between the slab edges – lines sculpted by nature – and  the lines created by the craftsman, from the butterfly keys which span gaps in the top to the plain modern base.  This dramatic contrast is presented simply, in a way that seems understated to my twenty-first century eye.  It is difficult to imagine how unusual these natural edges must have been fifty years ago.  What was new and exciting then has mellowed into something familiar, and because these “live” edges are now so familiar, they just look the way they’re supposed to.

Nakashima looked at the wood material in a new way that emphasized its natural origin, and he found a way to apply the sensibilities of both the architect and the craftsman (because he was both of those) to make manifest what he saw in the material.  The result had a great emotional – even spiritual – unity.

Trying to learn from George Nakashima in a different time is not simple.  What I have consciously taken from him is the idea of using the natural lines in the wood for something besides surface decoration.  I find myself looking at the figure in boards as something to use actively in the layout, as a source of impromptu joint lines, even calling attention to it with strips of contrasting wood.  I notice that my work is busier, with more intentional irregularities and ad hoc references to the material’s origin in a tree or to its history as a stick of lumber.

Many things today are more streamlined than ever, while other things are intentionally less so, and I suppose the furniture I’m making these days comes under the latter heading.  There is a lot of interest in things clearly made by an individual, with the associated personal touches, and we have even adapted the word maker to apply to people who do this.

I will close with a new idea for other makers out there:  artisan paper clips.  I am picturing a box of them, larger than before because artisan paper clips will all be slightly irregular and won’t stack well.  Actually the concept is not new;  the old Bob & Ray radio show once featured a humorous interview with the owner of a paper clip factory where the work was done by hand.  The workers were paid fourteen cents a week.

George Nakashima died in 1990, but you can see his furniture at various places, including www.modernegallery.com, where information on the show described above is available as well.

← Previous: Sherlock Holmes in the 21st century Next: The Live Oak Tree →