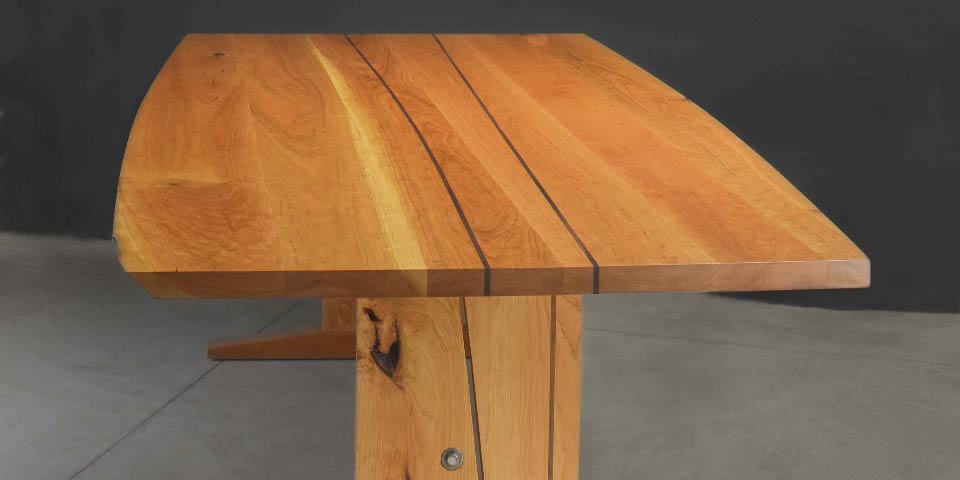 Evelyn and I were at a local hardwood lumber dealer’s, looking at some two-inch cherry for a dining table I was making.  Contrary to what they told me on the phone, they did not have hundreds of board feet of it, but only a hundred fifty board feet or so – not much more than the table would require.  This was the tail end of a larger supply, which had doubtless been picked over for a period of months.  So I didn’t think there would be much to choose from.  However, since we were there I decided to look through what they had.

There were a number of boards with dramatic knots right in the middle, including one that Evelyn thought looked like a phoenix, and a couple with the irregular edges that are called wanes.  The knotty pieces might have been okay, but I was hoping for something more suggestive in the wanes, that might work with the curved table edge I was planning.  Nothing seemed irresistible, and I decided it would make more sense to try another dealer who had more stock to choose from.  Evelyn wanted me to take the phoenix board home, but I didn’t want to bother with a single board and left the whole pile.

As it happened, none of the other suppliers I checked had what I wanted.  Part of the trouble was that I wanted FSC-certified stock (certified to meet Forest Stewardship Council standards).  I prefer FSC-certified stock if it’s available, although it usually costs more, and the stock with the phoenix board was FSC-certified.  So two days later I went back to the first dealer and bought the whole lot.  Every board was still there, waiting for me, and I began to warm up to these boards, especially when I got a better price for buying all of them.

When I was ready to start on the table, I laid out all the boards and planed one face of the less twisty ones, so as to see the figure.  Then I started imagining how they might go together to make the top, a step that takes me a lot longer than it used to.  I was looking for interesting features to work into the curved edges of the table and found none.  There were a couple of waney board ends, which I thought could be wire-brushed to make a nice uneven surface to contrast with an otherwise smooth edge, but they would be cut away if I carried through with my curved-edge plan.  This was one of the places where I stopped working on the project and went off to do something else.

I should mention that I wanted to do some graphic things with this tabletop, besides making use of irregular edges or knots.  There were going to be a couple of embedded lines in the top, narrow strips of a contrasting wood sandwiched between cherry boards;  these might be straight, skew or curved, depending on what went with the figure in the cherry.  This notion somehow led to the idea that the whole top might be skewed – the boards could be laid out at a slight angle to the main axis of the tabletop.  This would make a couple of the waney board ends come out at the corners of the table.  And that’s how the table got made.

The top has two embedded lines in walnut, one straight and one curved.  All the other joint lines in the top are parallel to each other but uniformly skewed.  This is further emphasized by the embedded lines and by a harmonious stripe of sapwood (lighter than the surrounding heartwood) I managed to include along one joint.  There are other differences in color and figure between adjoining boards – this was the remainder of a batch of lumber, so the boards weren’t particularly matched in color and figure – but these all work well with the skew and other graphic elements, to my eye.

The “phoenix” knot found its way into the table too, in one of the trestle ends, and that’s how the table got its name.

← Previous: Wall Motto Next: Sherlock Holmes in the 21st century →